Sumatran tigers are the last non-continental subspecies of tiger (meaning that they are not found on the Eurasian mainland) but also the smallest and the rarest of all tiger subspecies.

The Sumatran tiger is the apex predator of Sumatra, feeding mostly on wild pigs, muntjac and sambar deers as well as pig-tailed macaque. It is also a cryptic and solitary animal that is known for its very large home range.

Its life expectancy is about 15 years in the wild. Tigress gives birth in about 103 days to usually 2 or 3 cubs but sometimes up to six.

The Sumatran tiger is endemic to the island of Sumatra in Indonesia.

In the past, other subspecies of tigers roamed Indonesian forests, but both the Bali and the Javan tiger have been brought to extinction in 1940s and 1980s respectively.

It is capable to adapt to a wide range of environments provided that prey and water are available. Yet if Sumatran tigers pugmarks have been found above 3’000m in the moutains of the Gunung Leuser National Park (Wibisono 2010), its prime habitat is lowland and hill forests that can host population density 10 times higher.

The Sumatran tiger is listed as critically endangered by the IUCN since 1994 and is a protected animal by Indonesian law since 1990.

The main cause behind the decline of the Sumatran tiger is primarily habitat loss and fragmentation. I have already written an extensive article about deforestation in Indonesia and its causes, so I won’t dwell upon this issue here.

The impact of forest clearing is reinforced because it focuses mostly on lowland forests, the land which is the most suitable for conversion to agriculture. Yet this kind of forest also hosts the highest density of Sumatran tigers.

As agriculture (by smallholders or larger plantation operators) encroaches on natural forest, more human settlements are built on forest edges while tigers are left to live on shrunken plot of forest.

The logical result is increased conflicts between humans and wild tigers that attack villagers (regularly injuring and killing them) and prey on their livestocks.

Nyhus and Tilson have reported 146 cases of people killed by tigers between 1978 and 1997.

Recently the Indragiri Hilir regency in Riau provided a vivid example of the conflicts arising from large-scale forest conversion in an existing tiger habitats :

Similar headlines can be found concerning Jambi or North Sumatra.

Despite being a protected species, Sumatran tigers suffer heavily from killing, whether from professional poachers, by getting caught in snares laid out for bush meat or by villagers seeking revenge.

A 2004 report published by TRAFFIC concluded that :

The report also estimated that in the late 90s, early 2000s, about 45 tigers were killed each year.

The 1990 conservation law allows a maximum sentence of 5 years in jail and 100 millions IDR fine for wildlife traffickers, but courts often pronounce lighter sentences, even though the trend is towards harscher punishment nowadays :

It is hard to tell if those cases are the sign of increasing poaching or better results obtained from anti-poaching teams. Anyway, NGOs are campaigning for revising the 1990 law in order to increase sanctions against offenders.

Despite being still a reality, Luskin concluded in 2017 that poaching was not anymore the dominant threat to tigers but loss and fragmentation of habitat. His main argument was that tiger density was actually increasing within protected areas.

How many Sumatran tigers are left in the wild ?

The complex task of estimating

Due to its secretive nature, low density and very large home-range population survey of Sumatran tigers are notoriously difficult if not impossible. The first area-specific population assessments actually go back only to the the late 90s.

The paper from Wibisono & Pusparini provides an interesting overview of the research on Sumatran tigers, starting from the 70s. Besides the difficulty of actually measuring one single tiger population, the second issue to come up with a global population estimation for the entire Sumatra islands.

Researchers can usually only survey a few areas, so it is necessary to consolidate several surveys to get the big picture. This process is unfortunately very error prone (because only a few limited surveys are available, with different methodologies).

The most recent detailed population assessment I found was led by Luskin and published in 2017. Their research was based on camera trap surveys carried out in Kerinci Seblat, Gunung Leuser and Bukit Barisan Selatan as well a statistical model they developped.

If we try to cross check data :

The issue is that those tigers are scattered in various habitats or various size and level of encroachment.

The global tiger conservation strategy is to preserve “Secure Source Populations” (SSP) with more than 25 females. In 2012, Luskin concluded that the only existing SSP were Gunung Leuser and Kerinci Seblat. All other known habitats didn’t have enough female to be sustainable on the long run.

Three other habitats were nonetheless close to qualify (with a mean estimate of 18 to 21 females) : Sibolga and Batang Toru landscape, Batang Gadis and Rimbo-Panti landscape, and the Rimbang Baling and Batang Hari landscape.

In the mid-20th century, 12 SSP potentially existed. Luskin’s statistical model shows that mean tiger density increased from 1996 to 2014. This suggests that the main driver of tiger’s population decline is now the disappearance of its habitat, mainly in Jambi, Riau, South Sumatra and Bengkulu.

According to Luskin, the most crucial habitats of the Sumatran tigers are Gunung Leuser and Kerinci Seblat, where the two last remaining sustainable populations of Sumatran tigers are found. “Provided future deforestation and poaching is controlled, each of these parks could maintain >40 breeding females and likely persist without supplemental breeding programs for >200 years“.

Luskin suggests to focus other conservation efforts on four other potential SSPs that probably shelters around 20 females at the moment :

If I read between the lines, it means building a tiger’s lifeline along the Bukit Barisan mountain range. This is where most of the primary forest of Sumatra remains, the issue is that most of it is montane forest, hence having a low tiger density. Preserving the lowland forests of these regions is definetly the hardest challenge.

In the province of Riau, habitats outside the Rimbang Baling / Batang Hari landscape (on the west side of the province) would probably disappear. Given the current level of encroachment of pulp & paper and oil palm estates in this region, this seems rather likely anyway (the regency of Indragiri Hilir we have talked about earlier is in Riau).

What the government says

The government’s strategy, as presented in this article, is to :

Based on the 2016 population viability assessments conclusions of 604 Sumatran tigers in the wild, the government has set a 10% increase in population as target for 2019. I haven’t found officials figures about whether or not the target is going to be achieved.

The Indonesian government has developped a policy to deal with human-tigers conflicts. If possible tigers are lured back to the forest (most of the times with firecrackers). In case of attacks, tigers are captured and then brought to one of the 3 rehabilitation centers in Sumatra :

Tigers rescued from traps are also brought to those conservation centers. The idea is to rehabilitate captured tiger and then re-introduce them in the wild after they are equiped with GPS collar in order to be able to recapture them for inbreeding if necessary.

It is possible to breed Sumatran tigers in captivity :

Nowadays the Leuser Ecosystem is the largest remaining patch of forest on Sumatra. Most of it falls within the province of Aceh, but a smaller part belongs to North Sumatra.

The reason behind the relative preservation is the rugged topography of the province, which makes it less suitable for agriculture but also the separatist movement that opposed independance militants and the Indonesian army until 2004.

A post shared by Wedding,Prewedding,Engagement (@tekingphotography) on Oct 22, 2018 at 2:45am PDT

On top of that, an existing natural connections still exists with the Ulu Macen landscape found further up north in Aceh

Provincial government of Aceh has vowed to safeguard the Leuser Ecosystem and has declared that there will be no infrastructure projects developped inside the National Park.

But the pledges apply only to the park, which is only ⅓ of the Leuser Ecosystem. Environmental NGOs (like Walhi or Haka) constantly opposes development plans for infrastructure projects :

Encroachments from oil palm developpers as well as smallholders is still happening in the region, but not on a very large scale.

According to the BKSDA Aceh, based on monitoring undertook between 2013 and 2015, 200 Sumatran tigers are left in the wild in Aceh (Tempo). Luskin data for Leuser and Ulu Masen gives 140 + 45 adult tigers.

Kerinci Seblat is the largest National Park of Sumatra. Much of the it is actually remote moutainous areas, which are virtually inaccessible, thus protected. The lowland areas are threatened by illegal logging and illegal forest conversion by small-scale farmers.

Two Tigers Protection Units were established in early 2000s in the National Park. Between 2000 and 2012, the TPCU recorded 87 poaching cases that has lead to 33 tigers killed (Rifaie 15), indicating that their presence is not enough to deter poachers.

A natural connection between Kerinci Seblat and the Rimbang Baling/Batang Hari landscapes exist but deforestation is rampant in the area and the forest corridor is far from being fully protected by a conservation status.

According to the BKSDA Riau, there would be 53 tigers in Riau (Mongabay). The best habitat for tigers in Riau would be Suaka Margaswasta Bukit Rimbang, Bukit Batu (Rimbang Baling).

A female named Rima has been caught on camera traps with 3 cubs in 2015 and 4 cubs in 2017. There is even a footage of a couple mating (took 12 years of camera trapping to get it). So this population is still breeding fairly well.

I have used many pictures from Kerinci Seblat National Park in this article. If you are interested to visit, I have written a short travel guide about the Jambi part of the NP

The Batang Toru is under the spotlights since a moment due to a large hydroelectric dam projects ongoing.

More details about Batang Toru in the upcoming article of the series on orangutan. 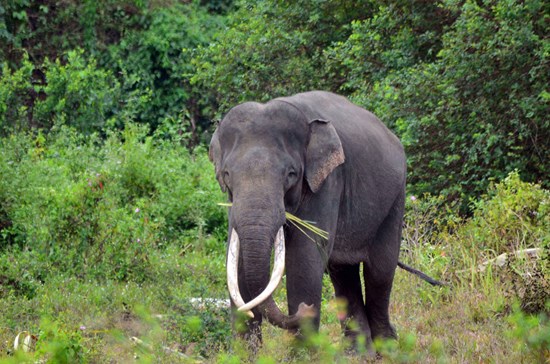 The Sumatran Elephant In 2020 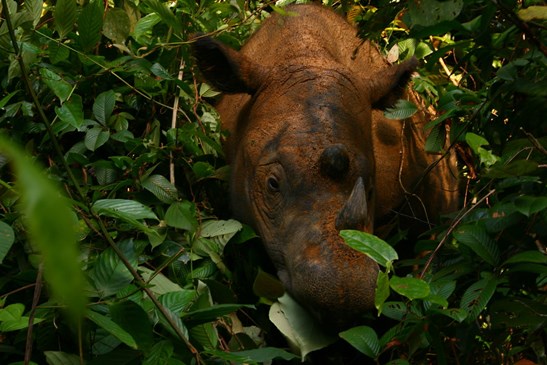 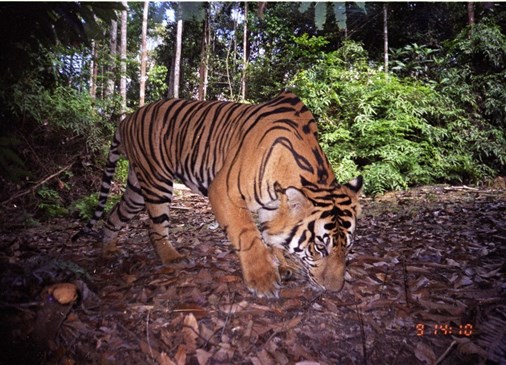