Wakatobi is a group of islands located off the south-east tip of Sulawesi island. Their old name (Tukan Besi ‘blacksmith’ islands) seems to have fallen in disregard.

The name “Wakatobi” has been crafted based on the names of the four main islands : WAngi-Wangi, KAledupa, TOmia and BInongko.

The main draw here are the absolutely stunning coral gardens. It is also part of the Indonesian government plan to create “10 new Bali” to boost tourism revenue, even though for the moment most of the efforts are poured elsewhere (update 2019 : Wakatobi is still as empty as before, actually tourism has probably even dropped due to rising air fares).

For me Tomia is the highlight of Wakatobi. The dive spots immediately around Tomia (like Ali Reef, Ridge 01 or Roma) have the nicest shallow corral garden I’ve ever seen.

The walls around Sawa islands are also the most beautiful walls I’ve dived in Indonesia. When it comes to corral Tomia is even better than Raja Ampat or Komodo in my opinion. And there is almost no one underwater.

If you want to go diving, you have different local alternatives besides the expensive Wakatobi Dive Resort on Tolandona island (immediately off Tomia). I was very satisfied by the services of Ahmad from Wakatobi Marine Dive (WA : +62 853 4085 3831). He charges 1’200’000Rp for 3 dives a day, including the gear (a bit outdated but in fair condition). The dive boat is quite simple and his partner captain looks like an Indonesian version of the Hound in Game of Thrones. It’s not fancy but the price/service ratio is great in my opinion.

The whole area is protected under a marine national park status. Accordingly, a 150’000Rp daily fee should be collected from visitors going diving or snorkeling but as of 2019 nothing seems to have been implemented. Things will probably change in the future.

If you just want to snorkel, gear can easily be rented in town. I guess the corral barrier surrounding Tomia can be reached and explored by swimming. It’s definetly worth renting a boat for a day and go see the stunning island of Sawa (boats can get there, the largest but check for the tide though).

There is a very large barrier reef surrounding Sawa that can be dived all along the way. The most remote spots are the only ones where you have good chances to see sharks in Wakatobi. Ahmad usually takes guests there if they are at least 4 on the boats to dive.

Otherwise, another offshore island has become popular on social media, it’s called Pulau Nda’a. It’s about one hour by boat from Kulati.

Tomia’s inhabitants are very friendly and welcoming. The atmosphere is very laid back and the sky full of stars at night.

Yet I always struggle to get some food in Tomia. The warung near the harbour is reliable but its menu is very limited. There is also the night market near Lakota beach but I always found it half empyt. Recently someone explained to me that you must go there very early to get some choice.

Kaledupa is mostly known for Hoga island. After you arrive in Ambuea in Kaledupa, you have to make the crossing to Hoga. It looks close but the boat has to navigate shallow waters and it actually takes 45 minutes. I did the trip with the school kids from Furaku.

The situation can be a bit confusing on Hoga so here is the big picture (as of my visit in 2017) :

Operation Wallacea is a an organisation that sells kind of science bootcamps. I feel that there is a lots of marketing involved and few actual research coming out of it but anyway they have like 200 guests during the summer months doing surveys on corrals and birds.

So there are dozens of bungalows virtually empty for most part of the year. The local operational manager is a great guy called Jeffrey and the dive center is run by a South-African instructor called Rowan. By the time of my visit (October 2017) the diving operation was on track to be separated from OpWal, so the plan was to act like a regular dive center and to use OpWal logistics (the dining room and the bungalows) to accomodate guests.

It’s best that you get in touch with Jeffrey before arriving (Whatsapp +62 853-9530-3993) because the bungalows are owned by different people on Kaledupa and they keep the keys there. If you want to eat at OpWal it’s possible but they have to be told ahead.

I arrived on Hoga without telling OpWall ahead and I had to spend the first night at Furaku (because all the bungalows were locked up). I would not recommend to do that without good commands of Indonesian, some of the villagers are very poor (as well as lazy and inclined to petty thiefs according to Kaledupa’s people) and get quite drunk at night.

I remember there was a young girl who was so sorry because of that, she was very startled when I told her we have our own share of drunkyard at home. Nothing dangerous though but there could be some misunderstanding.

I did a couple of good dives with OpWal (400’000Rp each), some of them with Rowan some of them with Jeffrey (who is a master in finding pygmee searhorses). The spot Ridge 01 was very nice with great corral (but I think Tomia is even better).

I spent 2 night at Jeffrey’s house in Kaledupa. He left me his motorbike and his wife cooked me great food. Such a cool guy. There are a couple of beaches around Kaledupa but unfortunately the weather wasn’t really good.

If I remember well I saw only one car during the whole afternoon I spent exploring Kaledupa.

On my way back from Tomia I stopped again in Kaledupa. I stayed at a simple wooden homestay not far from Ambuea market, called Wisma or Penginapan Madya Siru. 50’000Rp for a simple room, bathroom outside. Right in front you have the small warung Elfian without many choices but you can buy seafood at the market and they will cook it for a small fee.

Near Sombano you have a small saltwater lake that is inhabited by huge and flashy red shrimps that come out at the end of the afternoon to feed.

There are three Bajo settlements around Kaledupa, the most accessible is Sampela, but you have also Mantigola and Lohoa. Those are the Indonesian names ; Sampela is called Sama Bahari by its inhabitants. In case you don’t know, the Bajo refer to themselves as Sama and call their language bahasa sama.

To get there, ask a women who has finished to sell her fish at the market to give you a ride. Give her 10’000Rp.

If you want to bring a souvenir, they sell makeshift swimming googles. Again very friendly people, I even got a lesson in Bahasa Sama.

Wangi-Wangi island is the main island of the archipelago with Wanci as its main town. There you have the airport, the main harbor (with a few Pelni ferries stopping by, even though most of them are only stopping at Baubau), ATM as well as an immigration office.

Most visitors are (understandingly) eager to rush their way to the islands of Tomia and Hoga and will be annoyed by the conflicting schedules of boats and planes, almost forcing to you to spend a night on the island.

That was what I felt and later someone explained to me on Kaledupa that the regent of Wakatobi did this on purpose to boost hotel business in Wangi-Wangi. But it turns out that Wangi-Wangi deserves some time.

Things to see in Wangi-Wangi

There is not much remaining from the old fort of Liya but the lagoon right behind is stunning. I think that it would be very rewarding to get to Liya village, hire a local boat there (I would expect to pay 400-500’000Rp for the full day) and explore the lagoon.

Otherwise you could do as the locals and go for a swim or a shampoo in Kontamale cave (Goa Kontamale) :

While wandering in Wanci I came across a very nice procession. If I’m not mistaken it’s called Karia’a, it’s a life-cycle ceremony for young girls who are paraded in the streets wearing stunning outfit right before they reach their teenage years.

Before you take the boat to others islands, you can also spend some time in the Bajo village of Mola.

Coming to Wakatobi from Kendari

The only public flights to Wakatobi is between Kendari and Wanci. Daily flights are operated by Wings Air and 4 flights a week operated by Garuda.

Beware because until today (2019), the plane schedule forces you to stay one night in Wanci to get the boats to Kaledupa or Tomia the next morning.

Back then, there was no ferry on Wednesday, Friday and Sunday. It’s worth checking Wakatobi tourism board’s official website to check for an eventual updated schedule.

Other cheaper solutions exists. Pelni operates a larger ferry called Jetliner that goes from Kendari to Baubau and then Wanci. You can find schedules for the departure from Baubau in the article on Buton.

An even cheaper option would be the KM Sabuk Nusantara 44 operated by Perintis who allegedly costs only 50’000Rp from Kendari to Wanci (goes to Tomia and other islands afterwards). Someone gave me a contact of a guy called Firman that was able to send me the schedule in 2019. You can have a look on the schedule here. Try to contact him in Indonesian on WA : +62 822-9644-4948.

How to come from Tana Toraja ?

I did it once in 2017. Here is what I did but retrospectively it was probably not the best solution :

In my case it would have been smarter to go from Palopo to Watambone and take the ferry at Bajoe harbor because it leaves at night and gets you directly to Kolaka instead of Tobaku. According to ASDP website it leaves 3 times a day at 5PM, 8PM and 11PM. The trip takes 9 hours and costs 73’000Rp.

Coming to Wakatobi from Buton

You have daily public boat connections from Buton islands to Wangi-Wangi and Tomia.

Pelni are cross-provinces public ferries. A few lines make a stop in Wangi-Wangi before continuing their way towards eastern Indonesia : the monthly Leuser gets you to the Banda islands in 3 days for instance.

You may be interested by the fact that if few Pelni ferries stop in Wakatobi, many of them stop in Bau-Bau in nearby Buton.

Please read my guide to boat travel in Indonesia to get all the information.

Boats within the archipelago

The Wakatobi Tourism office has made a lots of information available online. Here is my personal experience :

There are different kind of boats available either wooden traditional boat (kayu) and speedboats. I always took what was readily available, I think I took the speedboat once. What I’m sure of is that I always paid 50’000Rp between each island.

For boats to Binongko from Wanci, check the website of the tourism office (link posted at the beginning of the section), the boat stops over in Tomia.

As usual I put most of the places quoted in this article in a Google Map. For detailed maps of the villages, please read this great document. 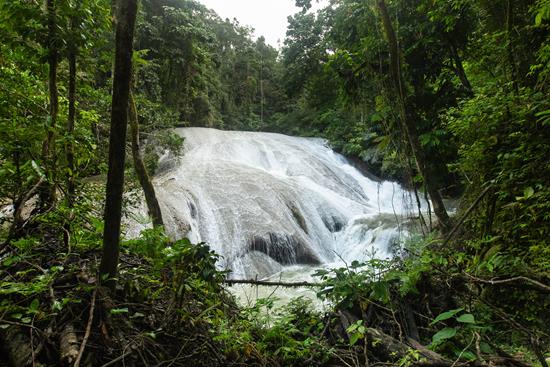 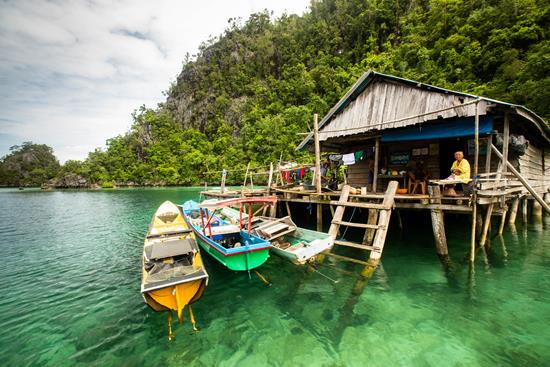 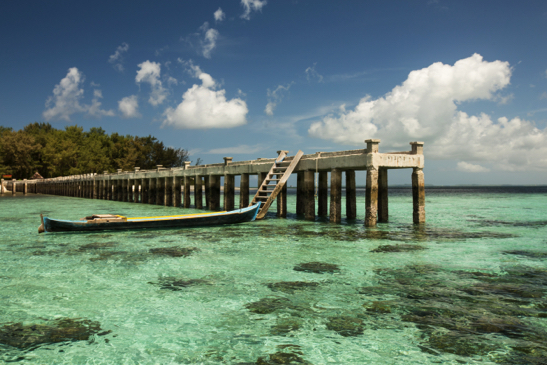 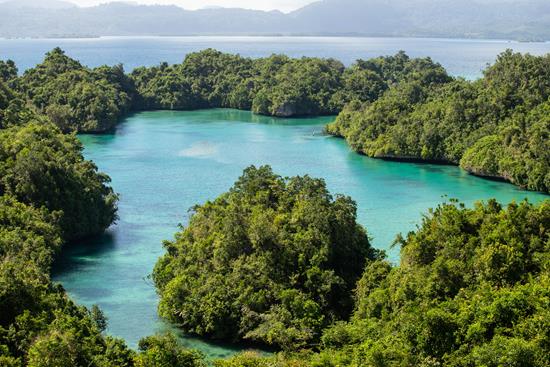 Elliot August 4, 2019 1 Comment
A guide to the beautiful lagoons of Napabale and Meleura. Only 2 hours from Buton.
Read More